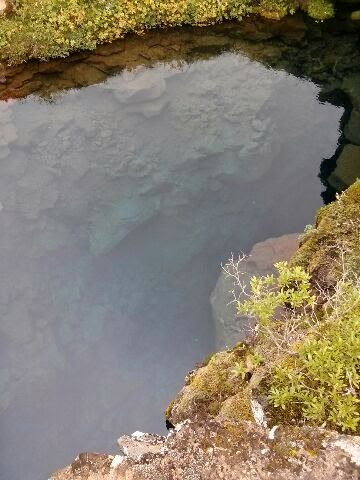 Last night's overnighting spot turned out to be close to perfect with painfully beautiful views and utter, desolate, silence. As mentioned yesterday though, getting to it is very tough: it's a half-shaft snapper for sure.

First job of the day after waking was to run around the 4.5K circumference of the caldera. It was a tough run; steep and  energy absorbing, what with the deep black-ash surface and all. It was a cracking way to start the day, nonetheless.

After leaving we got on with the business of covering a bit of ground, stopping only for lunch at the foot of Hekla, one of Iceland's most prolifically destructive volcanoes. It looked peaceful enough today but we didn't hang about too long.

Speaking of Iceland's unquenchable desire to remind the human race of its insignificance, within 48 hours of us leaving the Askja area last Saturday, a massive landslide comprising about one kilometre of mountainside gave way and slumped onto the caldera lake causing tsunami waves of 50m. The area is apparently now closed. Click here for details - we made our visit just in time, it seems.

By late afternoon today we made Þingvellir, the site of Iceland's (and I think Europe's) first parliament.

It's a fascinating place, not so much - for me - for its social history, but for its geological interest. It's directly on a fault line where two massive tectonic plates meet, and are slowly drifting apart. The result - on the ground - is plain to see. The earth simply cracks open here and leaves what appear to be bottomless chasms, into which falling is eminently feasible. Iceland doesn't yet seem that obsessed with health and safety.

The clefts run much deeper than the water table and some of the wider ones are exploited by divers, indeed there were two or three SCUBA diving clubs in attendance braving the 2-3°C water temperature.

A notice close to one point of entry warned of strong currents, underground chambers, and distressing depths. The pic shows an entry point, fair to say I wasn't personally persuaded that this is a life-expectancy extending form of recreation.

Apart from the geology, Þingvellir is otherwise pretty much a loose herd of underwhelmed tourists at peril of being swallowed by the earth. It's a bit like a stone circle without any stones.

Accepting unconditionally that it's undoubtedly hugely significant in cultural terms, we scuttled away pretty sharply and are now holed up at the foot of a waterfall at the coordinates shown. It's a very pretty vista but it's also nippy out and the winds throwing the truck about something awful so we're going to enjoy this panorama from inside with the heater well and truly on.