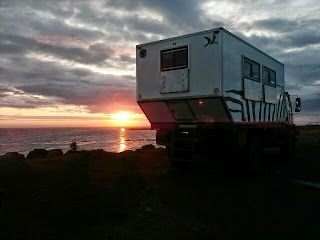 The weather really did close in last night and we were battered by wind and rain all night long. For the first time since we got here conditions could fairly be described as grey, cold and miserable.

Emma wanted to have a poke about in Reykjavik so we went first thing and made it happen. We took in a few of the more famous sights, including the Hallgrimskirkja (church), which dominates the 'happening' centre and which is really quite extravagant. Messrs Wesley would probably argue the central point was being missed.

Before today, by default, I generally disliked the cosmopolitan centres of cities, mainly because they compromise their very essence by focussing on presenting a caricatured façade of themselves with a view to extracting maximum cash from people who enjoy visiting the cosmopolitan centres of cities: think seaside rock, over-priced coffee, and a Taj-Mahal keyring on a grand scale. My view remains unaltered.

With the capital 'ticked' we headed off for a small, straggling town called Garður in the far south west of the country. Like most of Iceland, even this fairly innocuous place is full of oddities. There's a boat in a field next to a lighthouse with a red double decker London bus close by. Not far from this is a touching home-crafted memorial to the atrocities of Hiroshima and Nagasaki, and a little way further on a garden full of classic British sports cars including just about every version of Jaguar's XJS ever released. Icelanders probably don't understand why Björk has something of an international reputation for eccentricity.

I wanted to stay overnight in Garður because it's supposedly possible - if difficult -  to spot storm petrels out to sea from here (coordinates shown). It's a grand spot, as per the pic, with open sea views to the west and north and the birdlife is very rewarding. There's an abundance of sea birds and waders, including dunlin, Manx shearwater, and turnstone in very good numbers. A couple of Iceland gulls have put in an appearance too (not, so far, as common in Iceland as the name suggests). In terms of storm petrel, I definitely saw a tiny flock of weakly-flighted small black birds out to sea but they were too far out and I wouldn't dare claim them: the quest continues.

Meanwhile, Emma's been patiently (really!) trying for sea mammals again and has been rewarded by some really good grey seal sightings.

Tomorrow will probably be a driving day as we are determined to reach the northwestern fjords and headlands and suddenly seem short of time.