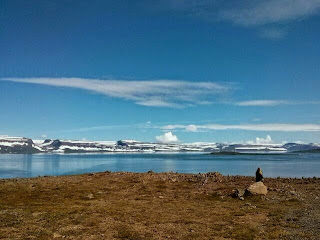 We're just about out of the north west fjords as per the (overnighting spot) coordinates. It's been a fantastic three days. I personally think the north west holds the most stunning scenery we've so far seen in Iceland. The distribution of bird species is also significantly different with sub-Arctic specialists like red throated diver and Iceland gull heavily favouring this area. I imagine its a fantastic place to be at migration time as the first/last staging post for Greenland.

We had a special treat before we left the headlands proper. For three hours or so, at a couple of points overlooking Ísafjarðardjúp (huge fjord) around the small island of Vigur, we watched whales. We had some fantastic views of what we - using our species guide books - suppose were minke and humpback. The minkes only appeared occasionally, without fuss, and seemed quite solitary The humpbacks on the other hand put on quite a show. There were at least three separate pairs of them and they would surface, blow, and then dive with full flukes out of the water. At one point one pair - for reasons known only to them - fully breached. Both were fully out of the water, did a half twist and landed on their side/back with an enormous crash.

Utterly, utterly, magical. The three hours just disappeared and I've never seen Emma so engaged in anything (pic). Only Ritalin sneaked into her breakfast cereal results in a similar attention span.