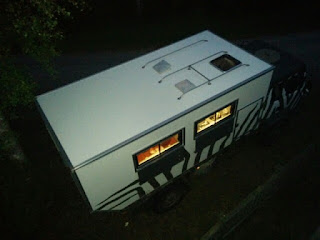 Better weather today but we still had to knuckle down and cover some miles. We saw some superb custom cars out on the roads, including a 1940 Willys Coupe hotrod.

As before, many Swedes and Finns fully embrace the whole classic Americana car scene and are obviously big burnout fans too. On many rural roads throughout both countries we've seen evidence of serious horsepower laying down lines of melted rubber. The longest burnout track we saw was today and must have been well over 100m long. It would be interesting to know where in Sweden Fast Freddy Fagerström lives - we may just have chanced upon his playground.

It's also been a day for harriers, we spotted three in total, in each case - surprisingly to GB eyes - quartering over agricultural crops. It must be that Swedish agricultural policy isn't as biocide-obsessed as it is in the UK. Ecosytems must actually be permitted to thrive in their cereal crop fields. What kind of madness is this?

The day's drive ended back at Store Mosse nature reserve (co-ordinates) - which has acted as a neat finishing point for our anticlockwise loop of the Baltic Sea's Gulf of Bothnia. We arrived at the reserve in decent time and have spent a good deal of time scoping. There's not much doing though. I even stayed out well after the dusk - dark now being something of a novelty and all that (pic).

We've also had time to train. Emma had a spin out on the bike whilst I ran.

On the truck side of things, I've finally paid attention and established that the standard LD fuel tanks seem to me to be brimming at 125 litres, rather than the claimed 137, and that our total fuel range on a mixture of (sealed) trunk and back roads is as near as makes no difference, 850 miles.