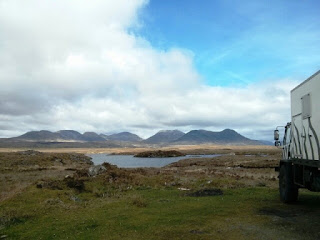 http://maps.google.com/maps?q=loc:53.45654%2C-09.96071
We're ticking off the counties. After Donegal, Sligo and Mayo, we're now in Galway.
Today we did some tourist stuff. We started with a trip to Aasleagh waterfall, then went on to Kylemore Abbey, an extraordinarily lavish place and a nod to its Victorian builder's decadence. It's now seemingly lucratively run and inhabited by Benedictine nuns. The Lord giveth, the Lord taketh away.
It's an amazing place complete with a truly outstanding and beautifully restored miniature cathedral (conceived and built as a shrine to the Victorian lady of the house who died young and unexpectedly). It also features the best example of a fully cultivated walled garden I've ever seen. The whole place was rammed with visitors and few were speaking English. There were lots of French, Italians, Japanese and Americans, as well as random others. We were swept up in the occasion and even did the full tourist thing and had a tea for two and a fruit scone, complete with jam and cream.
From the abbey we went to the Connemara National Park Visitor Centre: and promptly came back out. The car park and road leading to it were absolutely chock-full. It was a bit of a culture shock after the past few days of relative wilderness.
We decided to enjoy the NP from a home-made vantage point, so made our way to the coordinates shown where we have fantastic views of the famous 12 Bens of Connemara and the characteristic moorland bejewelled with a million ponds and lakes (pic). It feels very remote and untrammelled.
I managed a run late afternoon, aching and sore, but right enough. Emma's doing OK now, she's reported a sore throat again today: but levelled the Kylemore cream tea pretty effectively.
Irish oddity time: we were driving down a road and were met by a huge sign warning traffic of an exposed bridge across a Lough mouth where taller vehicles were not allowed in windy conditions. We were sternly warned to observe the windsock.
A hundred metres or so later was another sign depicting a horizontal windsock and instruction for tall vehicles to STOP if the windsock matched the depiction.
They were clearly serious, this crossing sounded tricky - and it was a pretty windy day. We then saw the bridge and another windsock warning sign. OK, we were on board with this, eyes were responsibly peeled for wind strength and direction.
The two huge windsock poles at either end of the bridge were sturdy and tall affairs: but the windsocks themselves had long-since blown away and never been replaced.
We crossed without incident.
Sent from my Nexus 4
Posted on: Monday, April 17, 2017