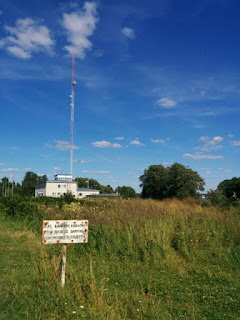 The Old Believers apparently don't do mornings and so remain a mystery for now. Their museum didn't open until 11.00am and hanging about wasn't really a viable option.

Not far into today's journey we spotted a lake with some formal facilities right before a set of roadworks, so we swam instead of queueing.

Therefter we made our way northeast to the west bank of the river Narva and bumbled along it for a while enjoying the tranquility and occasional quiet village. The river forms the border with Russia and the border enforcement here is very strict. There are signs everywhere indicating that it's illegal to swim in the river apart from at specifically designated spots, and that permits are required to take boats on to it. No activity at all is allowed on the river after nightfall.

Lookout towers dominate both sides of the river and, on the Estonian side anyway, guards are on patrol. We got checked ourselves. Two very polite and professional, (fully armed) guards took our passports and made some checks before wishing us a nice day. The road that runs north (that we had intended to follow) is barriered just beyond the border post building pictured so tomorrow we have a little retracing to do.

We spent a while gazing out over the river and idly watching Russians going about their internationally recognised business of being unscrupulous and shifty. To be honest, they looked a lot like you and an awful lot like me.

It was interesting to see how river traffic, including an ancient looking Russian hovercraft, stuck very much to their own side of the river. Conversely, gulls, terns and herons quite happily breached international convention with impunity.

We're at the coordinates shown now, a comfortable couple of kilometres from the border. It's a nice little spot on the edge of nature reserve. Best sightings have been a hobby flying overhead, a white admiral butterfly (a first for me) and a small newt that appeared from the peeling timber of a broken branch I was moving, but quickly retreated out of sight before I got a proper look.