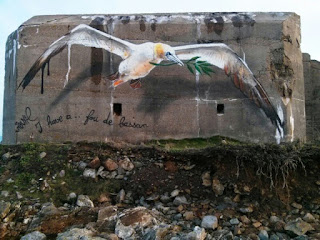 We woke this morning to another lovely sunrise and the realisation we'd been been sleeping next to a huge piece of graffiti (pic). Now, we don't condone graffiti but this gannet with an olive branch on a German WWII gun emplacement was both hugely impressive and much less offensive than your average cock and balls.

From the 'camp' we headed roughly south to a random point on the Cherbourg peninsula from where we had good clear views of Sark and Jersey. It was a cracking spot with vast beaches, huge sand dunes and almost perfect surfing sets. Also, just inland from here we spotted a firecrest. Fair to say Normandy is doing much to impress.

Prompted by Emma craving a fresh baguette, we wondered whether anything would be open today (being Boxing day and all that). Accordingly, in the name of Anglo-french cultural research (and the hope of being able to eat fresh bread), we pootled to a small but beautifully presented town to find that many things indeed were - and not just shops. Garages, recycling centres and all sorts of other things seemed to be cracking on as normal.

In fact, though there are obvious signs that locals are celebrating the festivities, we've encountered none of the madness that is now common back in Angleterre. We've seen no sign of wild-eyed panic faced with the fact supermarkets might be closed for a day resulting in the unspeakable horror that the Branston Pickle might run out, no signs of drunks asleep in their own vomit in the street, and no cars fitted with antlers.

By mid afternoon we'd found a cracking place to overnight overlooking open estuary from where we saw much impressive birdlife including massive golden plover flocks, Brent geese and a (surprising-over-brackish-water) kingfisher. Unfortunately, as the afternoon drew on, the dead-end road we were on started  to attract vehicle after vehicle, the occupants of which invariably decanted in full cammo gear; and welding shotguns.

It was clear that much 'fun' was about to ensue in the form of men who consider it perfectly reasonable to blast the hell out of defenseless wildlife practised their right to pretend they were, well, men. We left in the hope that tomorrow's news carried the story of yet another tragic blue-on-blue French hunting accident.

The enforced displacement saw us hunker at the coordinates shown, which is by no means a bad spot.

In health-related updates, Emma is now much improved, I'm starting with a sore throat and the truck's leak made for a right mess again today. The daily clean-up is just no fun and I'm fed up of stinking like used engine oil and lozenges.