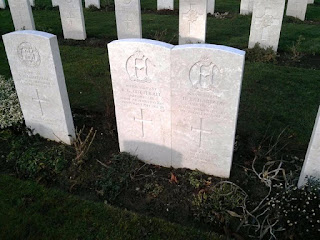 I had a rough night and by daylight (which happens at about 8.30am here, incidentally) I too was officially poorly. I suppose it was inevitable having inhabited the same few cubic metre space as Emma for a week.

Man-flu or not, first port of call today was the Commonwealth War Graves and memorial at Bayeux. This is the largest of the Normandy Landing cemeteries for British personnel - but it also contains allies' graves from many countries and even has a significant section dedicated to German personnel. On the same site, but over the road, is the Bayeux memorial where there are inscribed the names of allied personnel lost in the area whose remains have not been descovered or determined.

It's as sobering as it sounds. Even worse, a few of the graves have doubled-up headstones (pic) and sometimes these doubled-up headstones have several names inscribed upon them. We can only imagine that whatever horrific fate these people met meant they died together in such a way that their body-parts could not be separated. We may be wrong; and sort of hope we are.

After this we headed to the coast again to see Gold Beach, a site of landing if many British troops and one if the sites where a temporary harbour (brought over from England) was constructed to enable supplies to support the effort once the allied troops started to advance inland. Parts of the harbour are still in situ but these days all the action they see is from hundreds of cormorants and the occasional gull. Spotted a large tern whilst having lunch here - most probably a Sandwich (the tern, not lunch).

A bit of a quandary followed as we'd - by this time - pretty much 'done' the major D-Day sites and what with Emma being ill (but recovering), the truck being ill (but stable), and now me being illm(and worsening), we considered just heading back to Caen for the first available boat home. I really didn't fancy pushing our luck by trying to get all the way back to Calais for our pre-booked crossing next week so we came up with a compromise.

We're going to try to take the slow road to Rouen, give Emma the chance to do the parkrun she missed last Saturday, then take it easy back to Dieppe and sail back from there Saturday afternoon.

At the coordinates shown now, en route to Rouen, which turns out to be a really opulent area with massive houses scattered throughout the forest we're in, most of which have impenetrable electric gates and signs warning of guard dogs at large. The architectural style around these parts is very distinctive with timber beamed dwellings reminiscent of those found in and around Stratford-upon-Avon being the order of the day.

Had a quick look around before it got dark and it was pretty 'birdy'. Best sighting was a brambling in amongst a few chaffinches.