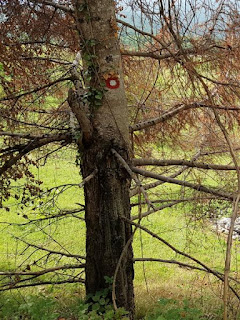 We had a run this morning before breaking camp and concluded there are worse places to be alive than the Una National Park. More good sightings this morning included a wall lizard, a large bush cricket and dryad butterflies.

Spoiler alert: I'm enjoying Bosnia and Herzegovina. Today was the most relaxed driving day since setting off. The west of the country at least is very sparsely populated and there's a huge sense of space. The roads are virtually empty and most are in very good shape; presumably having had to be fairly recently rebuilt following the war here. The landscapes are huge, with a mixture of rugged hills and mountains, and spacious valleys and plains. It's very, very fetching.

The drivers here have also been much more patient and friendly than some of the Croatians we encountered. Altogether it's been a real pleasure to gently bumble south and take in the vistas and cultural clues.

Speaking of; we've seen many a tell-tale red-and-white bullseye sign warning of landmines (pic) and every road we've travelled on has had frequent and huge bomb craters either side. We've passed through areas where whole villages have been wrecked and abandoned, and witnessed many occupied houses still bearing the scars of bullets and heavier ordnance. Encouragingly, more and more houses are being rebuilt and it's not been unusual to see a pristine property with an entire family sitting out enjoying a sit-down meal amongst the rubble of neighbouring properties.

It's hard to imagine the horror endured here only 25 or so years ago. Once again, the utter futility and idiocy of our species is brought crashing home.

The further south we've travelled, we've seen evidence of attempts at out-Godding, in as much as ostentatious mosques have largely given way to ostentatious churches. Also, in many areas, the Cyrillic version of street signs is also spray-painted out. Divisions and tensions clearly bubble. If Gods actually existed, you'd have to think they'd be very disappointed: or extraordinarily pleased at our bidding. You can decide which, or even make up your own brand of mumbo-jumbo.

An oddity we noticed in the last 20K or so we travelled today has been the sheer number of German-registered high-end sports saloons whizzing to-and-fro, often containing only one occupant; presumably a German. These people were clearly not obvious tourists so their presence is a bit of a mystery. We surmise that there's maybe a booming holiday-home thing going on. Certainly, some of the houses in the area look very affluent indeed.

Anyway, we're currently at the coordinates shown: Buško Jezero, a lake that has lots of information panels dotted about indicating its importance for birdlife. Having seen the signs, and the teeming birdlife, it would have been rude not to stop.

I've had an enjoyable time with the scope here but although it's teeming I've seen nothing particularly unusual. Best sightings have been a few yellow-legged gulls.