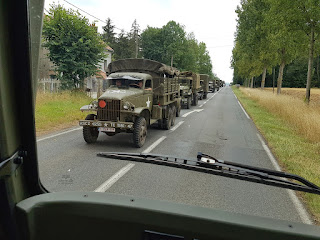 Blogging at 21:30 on Friday 22nd July from intended overnighting spot N 47.40166°, E 03.94767° / http://maps.google.com/maps?q=loc:47.40166%2C03.94767
We've essential had a similarly steady day to yesterday and ambled slowly southwards without much idea of where we were at any given time.
En route we've spotted a few interesting birds including a black redstart, a serin, and a lone cattle egret: miles from any cattle. It had a lost look about it
Once again the feel-goods have been helped by the prettiest of villages, acres of sunflower fields and vineyards, and a general Gallic quaintness steeped in history and culture that is just so darned civilised.
Helping with the happies, it's been great to hear increasing numbers of cicadas and grasshoppers as we've moved south, as well as spotting butterflies in numbers redolent of our youth when much less aggressive agricultural 'management' meant they at least stood half a chance. A silver-washed fritillary even came into the cab for a while to make sure we were noticing the differences in fortune that a bit of set-aside can bring.
Of course, being France, there's also the occasional oddity and a perplexing convoy of countless dozens of fully restored WWII American military vehicles driven by 'personnel' in full period uniform was just another one of those things that we thought it best not to think too much about.
Tonight's intended overnighting spot is in the Morvan national park and is also a bit of an oddity. It's a long-since abandoned football pitch off a tiny D road, miles from any sizeable community, but which has at least benefitted from at least one annual mow, making for just about perfect terrain on which to overnight in a T244.
From it, I've been for a 'lumpy' bike ride and heard (but irritatingly not seen) a turtle dove. Turtle dove sightings have escaped me for years, now; and such is their decimation in numbers it's a bit of a worry that few Englanders may never see one in England again.
Sent from my mobile device
Posted on: Friday, July 22, 2022